It was a fateful day, precisely on the 22nd of September at about 10:44 am when I received a greeting message on my WhatsApp messaging platform, confirming my name as a job applicant in a media outfit.

I confirmed. Immediately, the handler or contact asked me to send my three full-length portraits to the line. I did. Then, it referred me to the other line on the vacancy flyer.

Oh, I forgot to tell you that I had seen the vacancy on one of the leading social media platforms. A trusted one.

I dialled the number as instructed, but something unusual struck me – the voice sounded local. I was expecting a professional voice and formal conversation, but none occurred.

The Speaker on the other end of the call quickly did a phone interview with me (I will call him Mr. Emma (Short form of his name),
and asked me to come for a physical interview the next day. I affirmed my availability and ended the call politely.

I decided to check the flyer for the address, then I saw a random location – Omole Phase 1 in Lagos. There was no house number that I can locate. I became confused, tracked the name of the company on Nairaland, but it was not found. I checked youtube since it is an online medium, but nothing was found. This got me more confused.

I spoke to two of my friends about it and they told me not to attend the interview based on the instances I had noticed. I listened to them and ignored the invite.

Two days later, Mr Emma called my phone line, he asked why I did not attend the interview. But at first, he pretended to have called someone else and spoke in another dialect which I did not understand. I quickly called his attention to the call that he had called a wrong person.

Immediately after I did, he asked if I was the lady he spoke with two days ago and was invited for an interview. I replied, yes.

I suddenly summoned the courage to ask him more about the company. He asked me if the line he called was active on WhatsApp so that he can chat me up and answer my questions. I said, yes.

A few minutes later, Mr Emma chatted me up and answered all my questions. But I struggled to believe he was saying the whole truth. I felt uneasy about the company but could not really find the missing link. He asked me to come for the interview the next day by 12 noon.

I asked for the address, and he sent me the details. Guy, it was a hotel around Omole Phase 1. A big hotel by physical structure. I thought, maybe it was one of those companies that are readjusting their work mode due to COVID-19 pandemic. I thought they wanted to use the conference room for all the applicants who will attend the interview. But I guess I was wrong.

Again, I shared with my friends, at this point, they advised me to attend the interview since I have the address. They wanted the best for me as my friend. Then I chose to attend.

On the morning of the 25th of September, I began to prepare for my interview. That uneasy spirit came knocking again, but I fought it. I went to meet my mum in the kitchen and told her how I felt about the interview.

You know our African mothers and their words of encouragement and prayers of protection. My mum prayed for me and advised me to go. But within me, I did not feel that excitement of job interview.

It wasn’t my first time of attending a job interview. I wasn’t sure if I really wanted to go but after a while, I decided to give it a shot. Soon, I departed home for XYZ Hotel at Omole.

On arriving at Omole gate, the security personnel directed me to a street opposite NNPC which was the address of my interview. Hmm! I approached the receptionist and told the young man my mission there. He said I should call the line or contact of the person who invited me for the interview.

Then, I chatted with Mr Emma immediately to inform him of my presence and reconfirm the venue for the interview. He said I was at the right place, that I should wait patiently for some minutes till he joined me.

Out of curiosity, I asked the receptionist if people have been showing up at the hotel for an interview, he said NO. Hmm! I became more cautious at this time, heard of similar cases. I informed one of my friends who knew about the job interview, about the situation.

He quickly informed me that I should leave the premises instantly, that the company is not real. I was a bit frightened but I tried as much as possible to maintain my calmness.

Different thoughts crossed my mind. I asked Mr Emma about the exact place of the job interview in the hotel, then he said that the studio was in the underground of the hotel. Underground! I replied him surprisingly. Immediately, he said he was on his way, and would soon join me.

I wisely asked the receptionist again if the hotel had a studio, the ‘good’ guy said NO. Hmm! Now, I knew an extra minute there would be a trouble for me. So, I decided to stay outside the hotel and wait for few minutes for Mr Emma.

My good friend kept monitoring me via phone. He gave cases of stories he had heard and different scary events. While he was talking to me, Mr Emma arrived.

Mr Emma was quick to recognise me, I hastily ended the call with my friend. He ushered me into a restaurant outside the hotel premises but looked like it belonged to the hotel. I was a bit at peace – thank God it was not inside the hotel, was my thought.

He led the way while I walked in behind him. I noticed three guys in the restaurant but no one came in to buy food or drinks, no other staff member was there to sell food. The place looked desolate inside but beautiful outside. It has a glass door too. Mr Emma asked if I would like to take a drink, I declined his offer.

I felt more uncomfortable than before, especially at the stern look of the young guys there. I began to calculate what to do if any of them should approach where I sat. Mr Emma observed my uncomfortable sitting position and asked if I was alright. I replied, yes.

Mr Emma began his mission of my invite. It was more than an interview. It was a mission to me. He brought out some magazines, complimentary cards and letterhead of his company. Then he showed me a beautiful young lady who used to work with them but quit.

He told me that the lady left with all the contacts she had while she was with them. So, he said: I want to replace her. I want you on this team. I want a replacement. Hmm. That sounded juicy to me but very rare. He said he wants a partner in the business and he sees that trait in me, that I was the first person he would be interviewing.

This was a contrast of his discussion with me when he called to invite me for the interview again. He had already told me that day that he thought he was speaking with one of the ladies who attended the interview, which was why he spoke in his dialect.

So, he said he wanted a partner. I asked him where the studio was, he said it was located in the estate – contradiction – then later he said there is a studio in the underground of the hotel which he would love to show me after the interview.

He asked if I was interested in the job and willing to be a partner. Also, he said, equity partner. He asked if I had contributions to make regarding the job descriptions and offer, I gave my piece and shared my knowledge.

I did not want him to have a feel of my lost of interest in the job. I did not even like the concept of the tv programme he wanted me to host, it was against my faith and that was a deal-breaker for me.

Mr Emma asked if I was ready to see the underground studio and I said, yes. I asked him to lead the way which he did. I looked at the faces of the guys and I saw desperation and suspicion. Hmmm.

He led the way. The underground was within the restaurant. There were staircase downwards that led to the place. He descended the staircase but I did not follow him. I stood afar, close to the exit door and held my phone. I watched him open the door of the so-called underground studio. It was dark inside. I could see the dismay on his face when I took him by surprise.

I said: Sir, I have an urgent call which I would like to receive, I would be back in a jiffy.

He said, alright, you can pick your call.

I took to my heels. I walked fast as possible as I could without looking back.

All the while I was there, I was praying in the spirit and asking for God’s help, wisdom and protection.

When I had approached the road where I could see vehicles and more human beings walking, I sent a message to him stating my reason I left. I told him that I had to leave immediately to attend to an urgent matter.

Guess what Mr Emma said? You are not interested. No doubt. Take care. And I politely replied: Thanks.

I decided to share this story with you because a lot of people have fallen victim of a similar situation. Some became survivors, while others fell victims. I’m sure you picked a lesson from this story, kindly share across all platforms to help someone from falling a victim. There are job scammers everywhere.

This is STRANGE BUT TRUE! 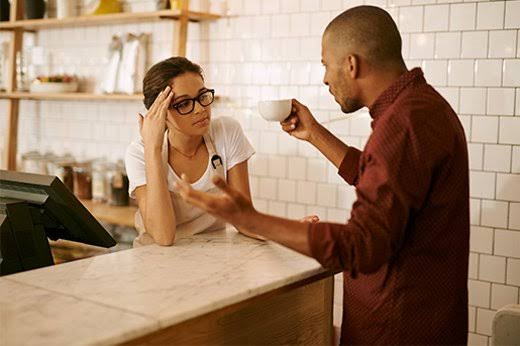