It flaps, it claps,

Its dazzles astonishing at gazing,

Toss up, Toss down in the sea of grass,

Its sight is wonderful, the great Alexandra!

The poem is written as a tribute of appreciation to a species of butterflies, the birdwing found in the forest of Oro province, the eastern of Papua New Guinea.

The writer, Rotimi Abati took his time to analyse the butterfly in this piece of art.

The Birdwing butterflies are considered the largest species of butterflies in the world with adult males wingspan reaching between 16cm to 20cm; while the adult females usually bigger than the male counterparts have their wingspan between 25cm to 28cm.

Read Also: PENLIT: A Call For A Gender Balance By A Young Nigerian

Male bird wings often have a combination of colors as green, blue green and black veins on their 6 wings which are different from the colors of the females which have the combinations of brown and white. 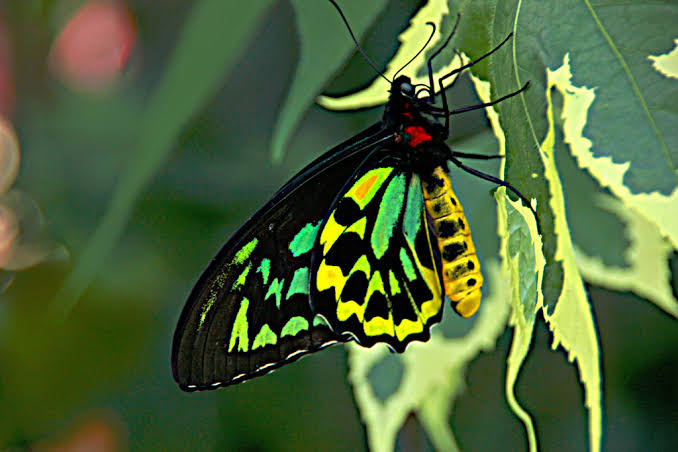 This species of butterflies was first found in 1906 by Albert Stewart Meek and named after Alexandra of Denmark.

The poem plays on the large wings of the butterfly which is considered big enough to make claps. Birdwings wings are strong and are amazing to watch as they flap their wings to flight movement.

The amazing mixed colors of the butterfly is also acknowledged. The distinctive colors birdwing butterflies helps quick recognition of the male from the females with the males having majorly green and blue-green colors with black veins.

In addition, the notable difference in the hindwings with gold spots. Whereas, female birdwings have brown wings with white marks. The hindwings are brown with yellow lines.

Read Also: #CreativeZone: Can We Truly Keep This Up? – Odedele Akinwande

The line four of the single stanza poem expresses the marveling size of the flying insect which may be considered scary to many people. Birdwings are not regular butterflies which can be found in many parts of the world, they are rare and mostly seen in the summer. Very limited to the rainforest of far Oro province of eastern part of Papua New Guinea.

The last line, about the habits of the birdwings butterflies which are the rainforests. Though, the butterflies may be domestically rear from pupa but the adults tend to live longer to full potentials living in the natural environment of the rainforest. Sadly, these species of insects face great threat as their homes are being burnt for other developmental purposes.

Due to their inability to reach full potential domestically, birdwings butterflies are becoming dwindling little for collection. This explains why they are rare to come by and very expensive to collect with an average price of US$8,500. Really, Her Majesty Queens doesn’t come cheap.